Legend has it that seven evil fairies decided to destroy the village of Godonécourt, now known as Saint-Mihiel, although the reason for their displeasure is unknown. They each seized a large block of stone and placed them in a row, blocking the River Meuse. The waters rose, threatening to flood the village and it was only saved by intervention from St. Michael the Archangel. The fairies, defeated, had to remove the boulders from the river and put them on the river bank, where they can still be seen today. 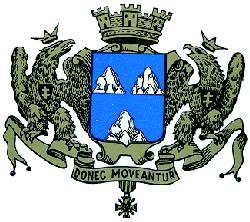 In gratitude to St. Michael, the town took his name. The town’s coat-of-arms consists of three silver rocks on an azure blue background. The motto, “Donec moveantur” (until they move) links Saint-Mihiel’s fate to the “Ladies of the Meuse”: as long as the rocks are not moved, the town will continue to exist.

During the French Revolution, when names of religious origin were banned, the town took the name of Roches-sur–Meuse.

Another explanation of the origin of the name Saint-Mihiel is related to the Benedictine abbey. It was founded in the 8th century on Mont Castillon, a few miles east of the town’s current position, by Lord Wulfoald and his wife, Adalsinde. The nobleman had in his possession relics that he had obtained during a pilgrimage to Monte Gargano in Italy, site of Europe’s oldest chapel dedicated to St. Michael. The new abbey that he founded to house the relics, which was also located on a hilltop, was quite logically dedicated to the archangel.

In the 9th century, the great abbot Smaragde decided to move the abbey closer to the banks of the Meuse, near the crossroads and the Meuse river crossing and beside the village of Godonécourt. Since the abbey was better-known than the village, its name, Saint-Michel, eventually replaced the name of Godonécourt.

The current name, Saint-Mihiel, comes from a mispronunciation of the name over the centuries.